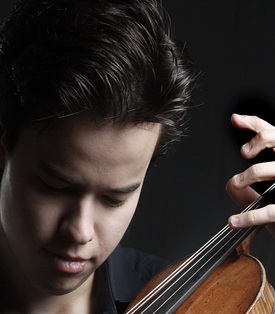 Roman Kim received his first violin lessons at the age of five and at the age of seven he won first prizes in national competitions, which led him to the Central Music School in Moscow in 2000. With a scholarship of the Mstislav Rostropovich Foundation (2001 - 2008) he become lessons by Maxim Vengerov since 2007 and attended master classes with Midori Goto, Lewis Kaplan, Miriam Fried and Gidon Kremer, while continuing to play concerts in major halls of Russia, Western Europe and South Korea.

In 2008, at the age of 16 years, Roman Kim was admitted at the Musikhoch- schule Köln (Cologne College of Music), where he is currently studying with Prof. Viktor Tretyakov. In 2012 he won the First Prize of the 28th International Music Competition "VALSESIA MUSICA". As a winner of the Cologne Interna- tional Music Competition (2011), he played with the WDR Radio Orchestra Cologne. In halls such as the Philharmonie in Cologne, the Tonhalle in Düsseldorf and the Hamburg Laeiszhalle he played with the Junge Philharmonie Köln, the Neue Philharmonie Südwestfalen and the Moscow Symphony Orchestra. The Deutsche Stiftung Musikleben gives Kim the opportunity to play a violin by Jo- seph Guarneri (Cremona, 1695), property of the Deutsche Musikinstrumenten- fonds.

Kim is especially devoted to the violin concertos of the Romantic period. He already interpreted the major works by Glazunov, Tchaikovsky, Sibelius, Brahms and Mendelssohn, which he performed together with several orchestras. Kim is particularly fascinated by the virtuoso works for his instrument and impressed by Paganini both as a personality and as a violinist and composer. Kim has intensely studied the bow and finger techniques of the legendary violinist and arranges challenging works of classical literature for his instrument following the inspiration of Paganini.

Kim's recording of Bach's Air, converted into a polyphonic solo piece by the young violinist has been viewed 170.000 times on YouTube.

Jimi Hendrix is another inspiration for Kim. He plays works of the famous electric guitarist on his instrument and does not restrain himself from expanding his sound by using various spectacular tricks.

In January 2013, Kim was heard in a one-hour radio-broadcast on WDR 3 Ton- Art. His debut as a soloist in the Philharmonie Cologne with the Violin Concerto No. 1 by Niccolò Pagnini was acclaimed by public and press. The Kölner Stadt Anzeiger wrote: "In Concert [...] Kim demonstrated a witch- craft, which made the visitors of the Cologne Philharmonie jump from their chairs. [...] No other is likely to create more tones and extravagances in five minutes."